“Pain comes to all of us some time or another. It’s how we learn to cope with it that determine our future.” 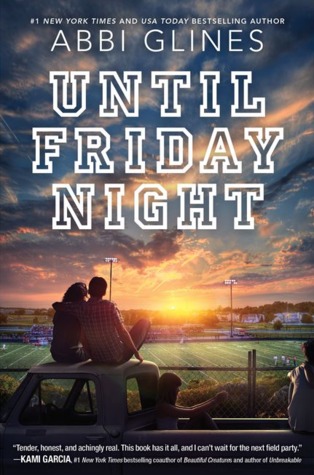 To everyone who knows him, West Ashby has always been that guy: the cocky, popular, way-too-handsome-for-his-own-good football god who led Lawton High to the state championships. But while West may be Big Man on Campus on the outside, on the inside he’s battling the grief that comes with watching his father slowly die of cancer.

Two years ago, Maggie Carleton’s life fell apart when her father murdered her mother. And after she told the police what happened, she stopped speaking and hasn’t spoken since. Even the move to Lawton, Alabama, couldn’t draw Maggie back out. So she stayed quiet, keeping her sorrow and her fractured heart hidden away.

As West’s pain becomes too much to handle, he knows he needs to talk to someone about his father—so in the dark shadows of a post-game party, he opens up to the one girl who he knows won’t tell anyone else.

West expected that talking about his dad would bring some relief, or at least a flood of emotions he couldn’t control. But he never expected the quiet new girl to reply, to reveal a pain even deeper than his own—or for them to form a connection so strong that he couldn’t ever let her go…

The book is about:
Until Friday Night is a YA contemporary series that will tell each love story of the star players of Lawson High’s varsity football team. First up is West Ashby, the Running Back of the team, and Maggie.

Maggie is a new student in Lawton High, moving with her aunt, uncle, and cousin, Brady, also part of West’s team and his close friend. The thing is Maggie doesn’t speak. She did it after the tragic incident that ended the lives of her parents.

What drew me in:
I read numerous Abbi Glines book a few years back, so when I felt like reading some romance, I grabbed this one. I knew I’m in for something quick and dramatic, what I was craving for at that time.

Characters & connections:
West was a typical high school jock. He was popular all over the school and the girls were drooling over him. The thing about Abbi Glines is she has a formula where the male lead acts like an asshole to all girls except for the female lead because “she’s not like other girls”. Meh. Aside from that specific part I hate, I love how West treats his family, his friends, and Maggie as well.

Maggie was very immature at times and it was quite frustrating. But, I can also admit that I never went through what she did so I cannot really judge how she dealt with her trauma. She has a kind heart and it was great to see her coming out of her shell and slowly recovering from the trauma she experienced because of her aunt, Brady, and West.

In terms of all of the other characters, I liked Brady best. He was a sweet and protective cousin and was also a good friend to West. I am excited to read his story and see him find his happy ending.

There was little exposure for the rest of the football team, but I hope this will be resolved in the coming books.

Everything I liked:
I read this as an audiobook via Scribd and let me just say that the narrators did a great job.

There were many things that I liked about this book but, for some reason, my brain keeps interrupting me with things that I didn’t. As you can see, I had a bit of a love-hate relationship with this book. Because, as I was listening to this read, I enjoyed everything. But, contemplating on it and looking back now, I can see all the things that make me go ‘Hmmm…’ and shake my head.

Let me just say that the book delivered in providing me the swoony romance that I was expecting. West and Maggie gave me heart eyes and made my heart clench when the conflict came. If I can describe it, it felt like watching a cheesy romance movie from the 90s or early 2000s, but it works because I love all the cliches.

My thoughts on how it wrapped up:
One of my main issues on this book is the codependency of the two leads with each other, as they held on like a life raft to each other. However, it was addressed towards the end.. so it made me feel eased a little.

Overall thoughts:
On its totality, Until Friday Night is a good book to pick up when you are in need of some straightforward romance reads that are somewhat stuck in the middle of YA and NA.