Title: Love from A to Z

📚 Series:  No.
📚 Genre: YA Contemporary Fiction.
📚 POV:  Alternating between two leads.
📚 Cliffhanger: No.

⚠ Content Warnings:  Islamophobia. Dealing with a chronic illness, multiple sclerosis. Death in the family due to illness. Mentions of rape. Victims of war. Drone killings.
⚠ Read if: you are a person. That’s it! Everybody should read this!

A marvel: something you find amazing. Even ordinary-amazing. Like potatoes—because they make French fries happen. Like the perfect fries Adam and his mom used to make together.

An oddity: whatever gives you pause. Like the fact that there are hateful people in the world. Like Zayneb’s teacher, who won’t stop reminding the class how “bad” Muslims are.

But Zayneb, the only Muslim in class, isn’t bad. She’s angry.

When she gets suspended for confronting her teacher, and he begins investigating her activist friends, Zayneb heads to her aunt’s house in Doha, Qatar, for an early start to spring break.

Fueled by the guilt of getting her friends in trouble, she resolves to try out a newer, “nicer” version of herself in a place where no one knows her.

Then her path crosses with Adam’s.

Since he got diagnosed with multiple sclerosis in November, Adam’s stopped going to classes, intent, instead, on perfecting the making of things. Intent on keeping the memory of his mom alive for his little sister.

Adam’s also intent on keeping his diagnosis a secret from his grieving father.

Alone, Adam and Zayneb are playing roles for others, keeping their real thoughts locked away in their journals.

Until a marvel and an oddity occurs… 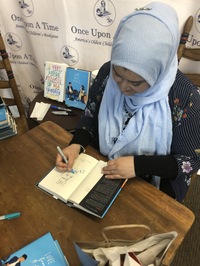 S. K. Ali is the author of Saints and Misfits, a 2018 William C. Morris finalist. She lives in Toronto with her family, which includes a very vocal cat named Yeti. Her second novel, LOVE FROM A TO Z, a story about finding love in the time of Islamophobia, was published on April 30, 2019 by Simon & Schuster. She also has a picture book co-authored with Team USA Olympic Medalist, Ibtihaj Muhammad, THE PROUDEST BLUE releasing on September 10, 2019, published by Little, Brown.

I’m starting this review by saying that everyone should read this. I don’t often say this, but I felt so many emotions while going through this book and I know that so many people need this book in their lives.

Love From A To Z is about Zayneb and Adam, two Muslim teens with polarizing points of view but both with strong faiths. Zayneb is a strong-willed Hijabi, who got suspended for fighting the bullying and Islamophobia from one of her teachers. She is sent to Doha to be with her aunt and she meets Adam on the plane. Adam is a college student who decided to take a break from school once he gets diagnosed with MS.

First off, let me just say that I am not a Muslim but I belong in a family where a large majority are Muslims. Though I know a lot of their feelings and thoughts through our relationships, I am not in the authority to note how the representation was in this book.

Despite this, this book made me feel so much, especially on the topic of faith, prejudice, and discrimination that Muslims face every day of their lives.

I applaud Love From A To Z for the powerful storytelling that it used to deliver its beautiful message. This book had laughter, tears, hopeful times, painful scenes, and moments that just rendered me speechless.

On the side of romance, I love how the author decided to portray this with a realistic arc. A lot of things happened like they would do in real life for teens. I love seeing the thought process of the two characters. The build up, the conflict, and the future were at the appropriate intensity, in my opinion.

Overall, I appreciate seeing both aggressive thoughts and peaceful ideas regarding wars, faith, and humanity. I loved everything and I would love to read everything that S.K. Ali would write.

What’s a YA Contemporary books that you can recommend?