Much thanks to Netgalley & Candlewick Press for this complimentary copy. This review is voluntary and opinions are fully my own. Also, all quotes are taken from the ARC and may or may not appear in the final published copy.

Title: What Makes Us

“Anger can be a virtue, but only if you can control it,” she says. “Isn’t that what makes us, anyway? What we decide, rather than what we’re born into?”

⚠ Content Warnings: Terrorism. Violence. Racism. Prejudice. Abuse of Power by the Police.
⚠ Read if: you are looking for a diverse/realistic/political read. 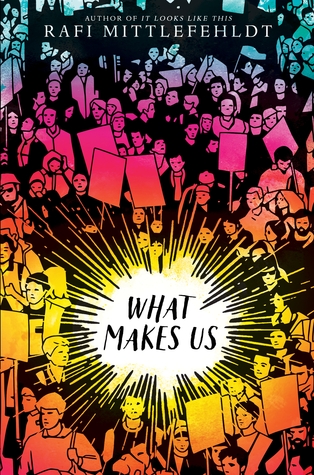 A viral video reveals a teen’s dark family history, leaving him to reckon with his heritage, legacy, and identity in this fiery, conversation-starting novel.

Eran Sharon knows nothing of his father except that he left when Eran was a baby. Now a senior in high school and living with his protective but tight-lipped mother, Eran is a passionate young man deeply interested in social justice and equality. When he learns that the Houston police have launched a program to increase traffic stops, Eran organizes a peaceful protest.

But a heated moment at the protest goes viral, and a reporter connects the Sharon family to a tragedy fifteen years earlier — and asks if Eran is anything like his father, a supposed terrorist. Soon enough, Eran is wondering the same thing, especially when the people he’s gone to school and temple with for years start to look at him differently.

Timely, powerful, and full of nuance, Rafi Mittlefehldt’s sophomore novel confronts the prejudices, fears, and strengths of family and community, striking right to the heart of what makes us who we are. 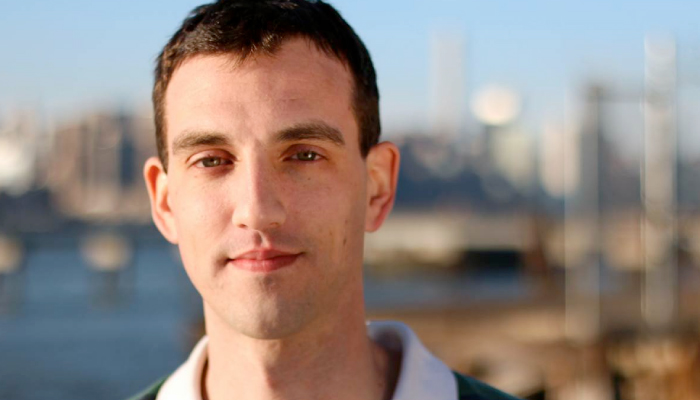 Rafi Mittlefehldt is the author of two young adult novels, What Makes Us, releasing Oct. 15, 2019, and It Looks Like This, published in 2016.

When he’s not writing, Rafi works in instructional design and volunteers for I’m From Driftwood, a non-profit that collects and posts LGBTQ stories from around the world. Raised in Houston, he worked briefly as a reporter for a small-town newspaper in Central Texas before settling in New York. He now lives in Philadelphia with his husband Damien and dog Betty.

What Makes Us is a coming-of-age story that talks about finding one’s self, understanding your identity, learning to love, learning about injustice, learning to hold on, and learning how to let go.

It revolves around Eran, trying to understand why he feels that he has so much passion inside him, his relationship with his Eema, and his longing for the care of his father.

Eventually, a viral video leads him to the revelation that his father was a terrorist, and leads him to question everything that he thought he knew about himself.

I loved that this story showed the perspective of Eran’s mom and how she made her decisions. But, the third persepective, which focuses on Jade, Eran’s friend, feels a little disconnected to the essence and message of the story.

If there is one thing I could commend, it’s an interesting male POV that is very much inclined with all his emotions. Though I can’t say that I can relate to the character, the author did an amazing job on this matter and his writing can bring forth many important conversations on the social justice issues this book has touched.

The book would have been a perfect one if the resolutions were done better. The book took a different course than what I was expecting, so I felt a little lost.

All in all, a promising read.

Have you read a similar book as What Makes Us?

2 thoughts on “Book Review (ARC): What Makes Us by Rafi Mittlefehldt”