Title: The Female of the Species

“But boys will be boys, our favorite phrase that excuses so many things, while the only thing we have for the opposite gender is women, said with disdain and punctuated with an eye roll.”

A contemporary YA novel that examines rape culture through alternating perspectives.

Alex Craft knows how to kill someone. And she doesn’t feel bad about it.

Three years ago, when her older sister, Anna, was murdered and the killer walked free, Alex uncaged the language she knows best—the language of violence. While her own crime goes unpunished, Alex knows she can’t be trusted among other people. Not with Jack, the star athlete who wants to really know her but still feels guilty over the role he played the night Anna’s body was discovered. And not with Peekay, the preacher’s kid with a defiant streak who befriends Alex while they volunteer at an animal shelter. Not anyone.

As their senior year unfolds, Alex’s darker nature breaks out, setting these three teens on a collision course that will change their lives forever. 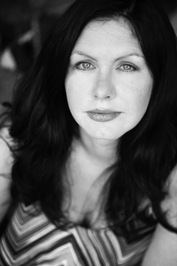 Mindy McGinnis is an Edgar Award-winning novelist who writes across multiple genres, including post-apocalyptic, historical, thriller, contemporary, mystery, and fantasy.

While her settings may change, you can always count on Mindy’s books to deliver grit, truth, and an unflinching look at humanity and the world around us.

I picked The Female of the Species as my next audiobook read because I was curious about its blurb. I have to say that this book is brutal – it gets real and raw and sometimes, we just need books like this.

This is my first read from Mindy McGinnis and I would just like to say that I love the way she writes. It is realistic and brutally honest. Her sense of humor is the subtle nerdy type but it’s one of those types that I like. This storyline that she chose was unique and different and her delivery style is unlike most YA stories in circulation today.

The story has three characters whose lives are intertwined with another – Alex, who deals with the death of her sister after being raped, as well as the darkness inside of her; Jack, who is a fairly normal guy and also attracted to Alex’s mystery; and Peekay, who became Alex’s friend due to circumstances but went deeper beyond that.

I don’t want to divulge what happens in the book too much. I just want to say that the author has amazing characterization for each of the characters. They have unique thought processes of the three main characters. The readers get a glimpse to their feelings and fears, which are actually very varied. I have confess, though, that I hate having to stay in the POV of Jack because I am repelled by some of his thoughts. He was too selfish most of the time and he loved making dumb decisions.

If you have read some reviews about this, you already know that this book is as dark as it gets. There’s alcohol, drugs, and sex enjoyed by crazy teenagers. There’s misogyny, rape, slutshaming, assault, and the people’s tendency to ignore issues like this.

The one that will make you crazy is the ending. I hate that it ended that way. But maybe it is justified, too??? I don’t know what to say about the ending even though I put off this review specifically because I was still trying to absorb what happened.

By the way, the audiobook production was superb. There were three narrators for each lead character, so it’s easy not to get things mixed up.

Overall, I admit that this book is a great read, especially if you are looking for one that can change the way you see things. The statement that nothing is ever black and white has been validated to me because of reading this.

Have you read this book? What did you think?

10 thoughts on “Book Review: The Female of the Species by Mindy McGinnis”